This annual program is an opportunity for property owners to improve sidewalks, sharing the cost with the City.  This program allows the City to make ADA improvements coinciding with the Annual Street Maintenance Program.    This program includes the replacement of existing deteriorated street curb and sidewalk. The City pays for 100% of the cost of replacing street curb and property owners pay the City $1.50 per square foot for sidewalk replacement with the City paying the rest of the cost. Applications are generally opened to City Residents in January of each year to be evaluated for inclusion in the program as funding is limited at $80,000 for FY18. 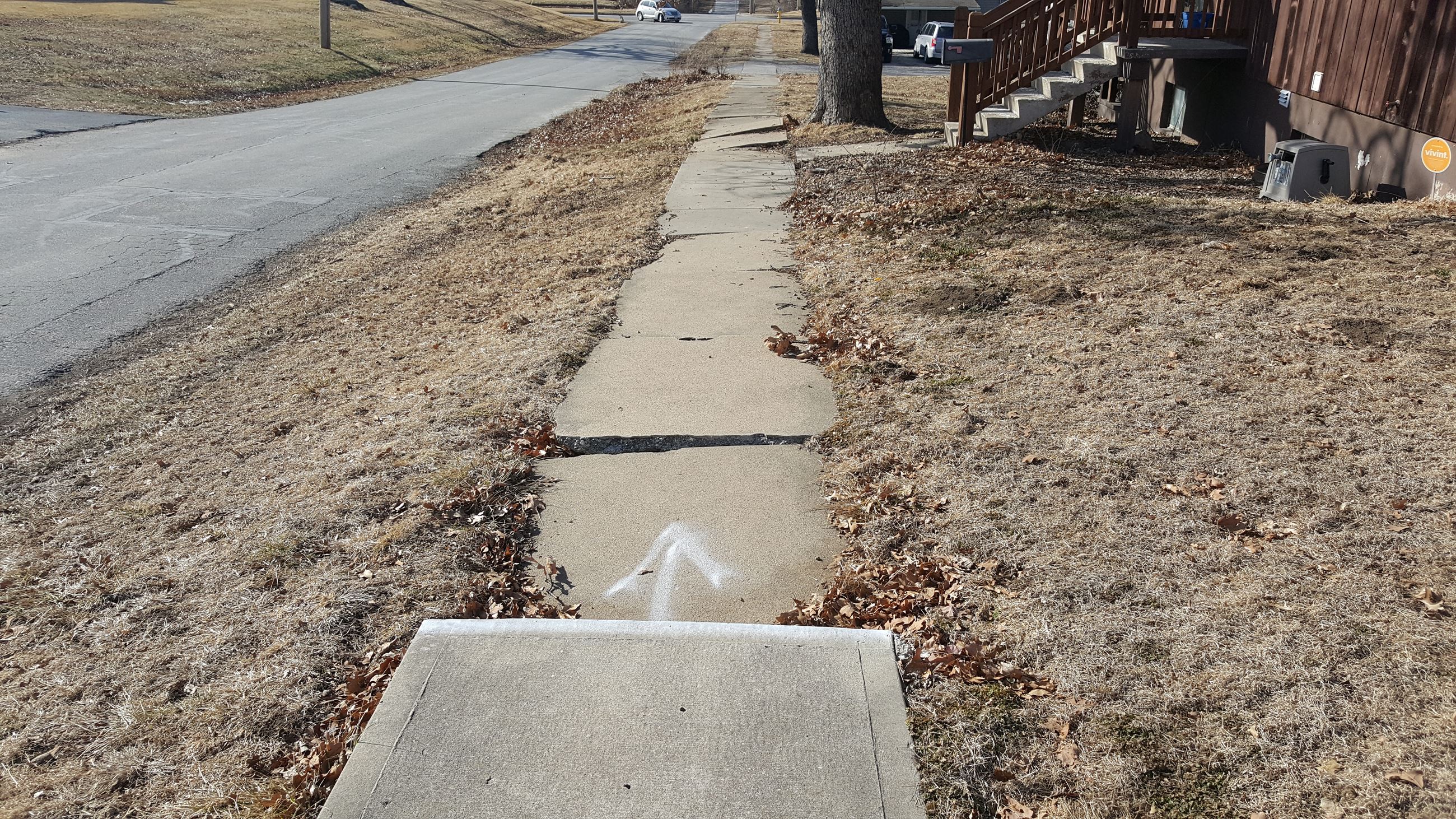 Annual Street Maintenance to repair and maintain as many streets as possible within the CIP Transportation Budget allowance.  Includes Overlay, Chip Seal, Seal Coat, Asphalt Patching, Crackfill material, Pavement markings, Roadway Storm Pipe replacement and Alley Rock     The Street Maintenance program is budgeted at $600,000 this year for the maintenance and repair of City streets. Warrensburg has a little over 100 miles of streets that are predominantly asphalt surface. The average lifespan of an asphalt street is 15 to 18 years before it needs to be totally resurfaced. Typically, funding to resurface City streets only allows work to be performed on 2 to 3 miles of street per year. The remaining funding is expended on asphalt street patching, hot tar crack filling, pavement markings, polymer overcoat sealing, and other materials required to maintain the City’s right-of-way.

This project is a continuation of the Downtown Streetscape Program which has been ongoing for many years. This year’s project includes the widening of South Holden St. starting at Grover St. and concluding at the intersection of Holden and South Streets. Amenities include the installation of new street lighting and placing the overhead utilities underground, new sidewalk with a brick paver ribbon along the back of the new curb and bike lanes. New asphalt overlay will be placed from South St. to West Pine Street. A portion of the project is funded through the use of MoDot STP Funding in the amount of $330,000 with City Community Investment Plan funding the remaining cost of the project. 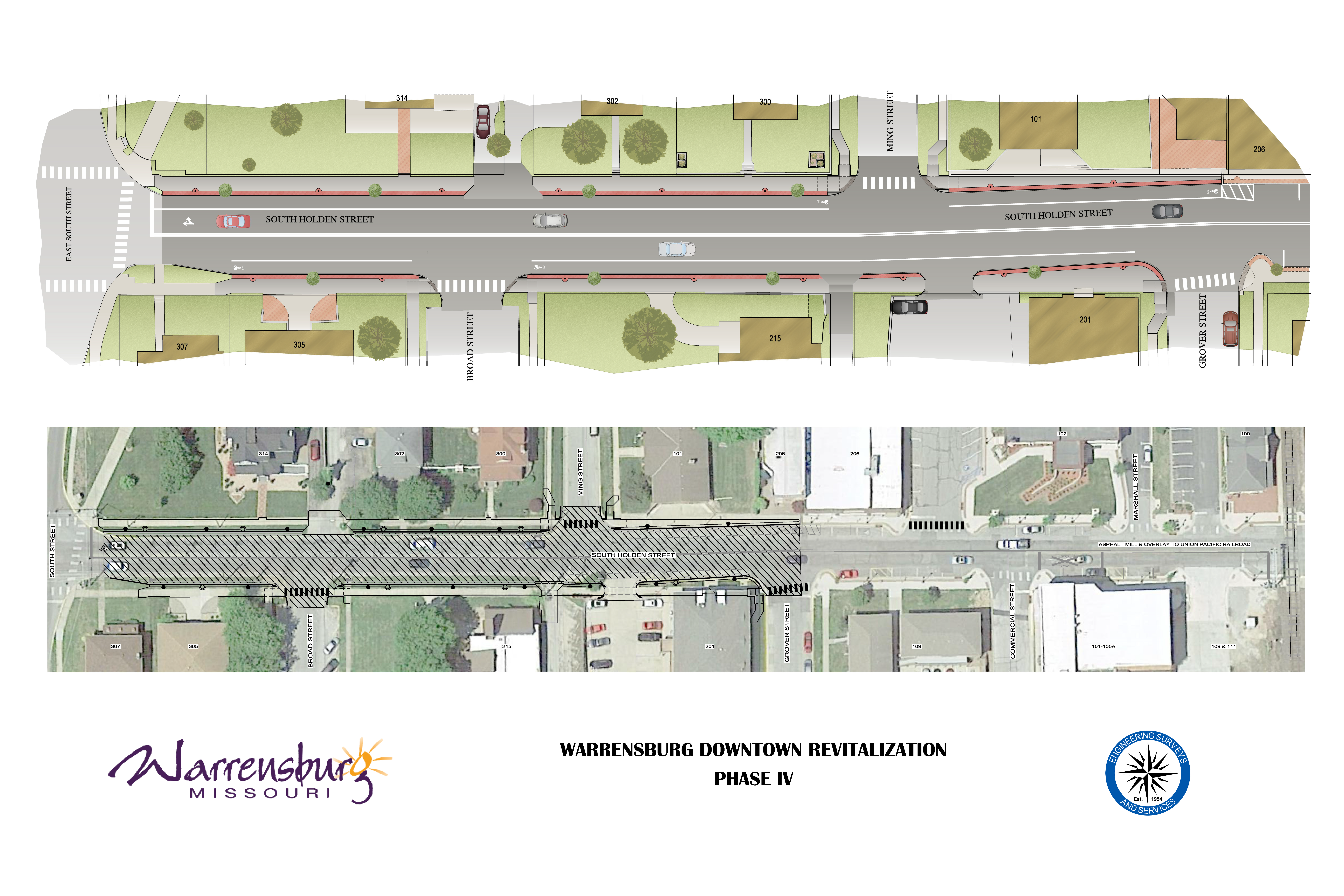 Access to the Cayhill Subdivision will be vastly improved with the construction of this section of street. Currently, access is only attainable from the State Highway 13 Loop. This increases the response time of emergency services to this subdivision. Veterans Road from inception has always been considered a Collector/Arterial once the connection would be completed between the Cayhill Subdivision and Enterprise Avenue. In April 2017, voters approved General Obligation Bonds to construct this street section. The bid for construction has been awarded to KAT Excavation in the amount of $551,023. The street will be of asphalt construction with a gravel shoulder. Once the area is developed in the future, curb and gutter along with underground storm drainage will be installed. An additional amenity to this project is a walking and biking trail running the length of the street along the south side. 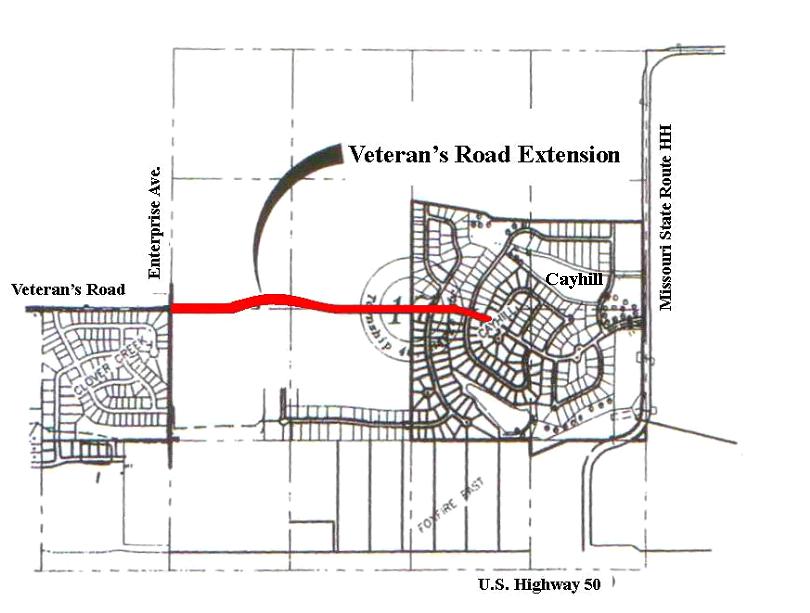 As part of the agreement between the City and the new Dollar Tree Distribution Center developers, it was required that the City install approximately 700’ of roadway along the south side of the distribution center to accommodate their employee access to the facility. Work commenced in March with completion expected in May.

The street will be constructed of full depth reinforced concrete to support the expected heavy over-the-road trucks that will be fueling at the new truck stop to be located in the area. Estimated cost of the street is $644,017 with Emery Sapp and Sons performing the work. This project is being funded by the voter approved General Obligation Bonds.

The efficient moving of traffic along Maguire Street has been a concern of the citizens of Warrensburg for many years since the City took over the maintenance of Maguire/13 and Young/ Bus.50 from Missouri Department of Transportation (MoDOT). Due to the antiquated equipment adopted by the City, it was felt by the voters and City Council that the signals should be brought up to current/modern standards.

This project entails upgrading of all the traffic signal controls within the City. The installation of radar detection vs. the old in-ground inductive loop detection system. Also the ability to monitor and change the timing, by computer program, to adjust to events and traffic flows that change from time to time or spring to fall with the University population.

Additionally, permanent steel pole mounted signals will be installed at the intersections of Ridgeview Drive and DD Highway/Hale Lake Road and Maguire/Bus.13 and DD/Hale Lake Road. MoDot has agreed to pay half the cost of this work along with the cost of upgrading the two signal sets at the Maguire and Highway 50 interchange.

The entire upgrade project is in the bidding stage at this time.

With the increased commercial development of the area, traffic volumes have grown to the point where this intersection has developed the need for improved lighting and traffic control. The preferred choice for efficient and safe movement of traffic using this intersection was determined to be a Round-About Traffic Circle.

During construction, traffic will be maintained allowing for both north and south bound lanes of travel. The intersection improvements will be constructed one half at a time.

During the initial phase, work will commence on the east half portion of the intersection, with Hawthorne Blvd. being closed at Simpson Drive. Those wishing to access businesses in the area will need to follow Cooper Blvd. to Hawthorne Blvd. to Simpson Drive or access from the Walmart outer road on the west end of their parking lot.

Once the first phase is complete, traffic will be diverted onto the new section and the westerly half of the project will be constructed.

Those wishing access from Old Missouri 13/County Road 21 onto Maguire/Bus.13 may use either Cooper or the temporary access road that will be built just north of the project as a connecting access.

The project is being funded with Transportation Development District funds through the addition of sales taxes collected on purchases within the confines of the district. Early estimates for the cost of the project approach $1,000,000 which is being bid in May.