Situated between two plants potted in stone stands a 21 foot high Memorial commemorating the Northern Soldiers of the Civil War. A mustached soldier firmly grasping his rifle with both clenched hands, grabs the attention of everyone who enters Sunset Hill through the East Entrance. "In Memory of Union Soldiers and Sailors" is proudly carved into a marble block within the statue that gives gratitude to the dozen and a half graves located in the general vicinity. In a side note, when this statue was renovated in 1965, his rifle was missing and his nose had been shot. 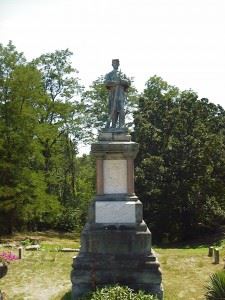