Superstition created a minor uproar in Warrensburg back in 1894 when rumors spread about the theft of Charles Banks' body. Banks, a murderer who was executed right here in Warrensburg, was thought to have his corpse stolen by body snatchers. The sunken condition of the grave only led to further speculation. Investigators were able to dispel town hearsay by digging up the grave of Banks and swearing on record to the discovery of a decomposing, and a horrible smelling body.

Between two cement vases and a wide array of flowers, lies the eternal resting place of Linda Barnes. Next to 51 year old Linda's grave is a tiny statue of a humble angel. Another grave, about 30 baby steps east of Linda's, shows a mother deep in prayer. This grave, belonging to eight year old Stephanie JoAnn Hall, is adorned with the statement, "She Knows What Love Is."

City Marshall Ryan and Night Marshall Basham were fatally shot and killed in a 1908 shootout at the old Estes Hotel (which used to be located to the southern catty-corner of City Hall). Byron Hall, declared insane by the testimonies of witnesses and family members, was apparently under the belief that attackers were pursuing him for $500 he had earned herding sheep. Before Hall committed suicide by shooting himself into his own heart, he shot Ryan 3 times and sent Basham to his death with a steel bullet that passed entirely through the Night Marshall's body. Basham and Ryan are both buried about 100 feet North of the Confederate Memorial. 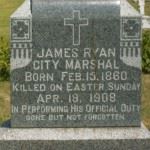 A. C. came to Missouri in a controversial late 1800's program that sent trainloads of young orphans from the East Coast to the Midwest. Adopted by the Young family who preceded the Cheatham's in the banking industry, A. C. would go on to serve our country in World War I and become the State Commander of the American Legion.

Located beneath a giant vase lies the eternal resting place of Horace and Effie Bass. The Bass family landmark can easily be identified by anybody passing near the Cheatham Monument.

Buried about 20 yards north of James Kirkpatrick's grave lies a unique tombstone, carved out of wood, and created out of love. This somber memorial is dedicated to the evidently short life of Abigail Lee Berry.

Near the shade of the tall oak tree where the wind always seems to blow, lies the eternal resting place for L.M. and Martha Berry. Located about 200 feet northeast of the Confederate Monument and surrounded by family, this grave's most noticeable feature is the large cylinder lying on top.

Secluded between two evergreen trees standing over 12 feet tall, lies the graves of Milton and Catherine Boon. Milton, a World War II veteran, and his wife are buried near other family members.

Lt. Eugene Tipton Bradshaw: Lt. Bradshaw's life was cut short when he was killed in action flying over Belgium during the second World War. 21 year old Bradshaw served our nation in numerous military segments including the 57th bomb squad. 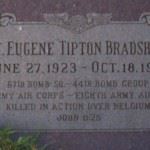 Robert Bradshaw was born on April 27 of 1915. Exactly 80 years later, on his birthday, Robert passed away. This military veteran of World War II, who also ran a taxi service in Warrensburg, is buried beside his wife Catherine I. Bradshaw who perished on a cold January day in 1999.

Every harvest season, Willis Brazil would make his way into Warrensburg to help local farmers shuck their corn. One year, when an ear of corn slipped under a wagon, Willis placed his hand under the wheel at the wrong time as the team of horses moved forward and broke Brazil’s arm pinching it against the hard, frozen ground. After the arm was set and pain medication was given, Brazil evidently took too large a dose a day later and the medicine left his mind in a delusionary state. Living the rest of his life at the county home which used to be located off of Highway 50 on the south side of town, Brazil is now buried in the far west corner of the cemetery known as the “pauper’s field” or indigent area.

In an earlier day, when city water was poor and store fronts contained five gallon jugs to help cool off patrons, Clement Bruch delivered water from his property most commonly referred to as the Electric Springs. Located near the present apartment complex named after the Springs, Clement would deliver water store front to store front while riding along in his horse and buggy. Clement’s tombstone may be seen about 25 yards east of the American Flag.

Hidden near the south side of section S3 stands a pulpit made out of stone. With a closed Bible laying atop its stand, the soul of Ruby Bryant now lays between God’s hands.

Jay, as most people called him, and his wife Ethel ran the successful Buente Drug Store located off of Highway 13 near the railroad. Jay, who served his country in the second World War, is buried near another veteran named Joseph A. Douglass.

As a 1st Sergeant in the U. S. Army, Robert Burford fought for our nation in both World War II and Korea. Originally with the National Guard, this Leeton Postmaster was buried in 1993 near the northwest corner of this cemetery. Robert’s spirit lives on in the hearts he left behind.
/QuickLinks.aspx
/FAQ.aspx
[]